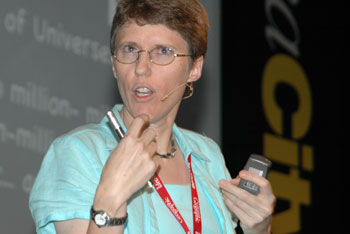 Dr. Amanda Peet is a Theoretical Physicist and Assistant Professor at the University of Toronto. Her research focuses on String Theory, sometimes known as Superstring or M theory, which posits that the fundamental constituents of matter and forces are tiny vibrating strings. It is arguably the best theory currently available which provides a unified theoretical framework for all known matter and forces. One of the most important aspects of string theory is that it is a self-consistent theory of quantum gravity. It modifies Einstein’s General Relativity at ultra-high energies in a very specific way that marries it successfully with Quantum Mechanics. It also predicts new phenomena, such as extra dimensions of space that are as yet too small to be seen in experiments.

This speaker has no past talks.